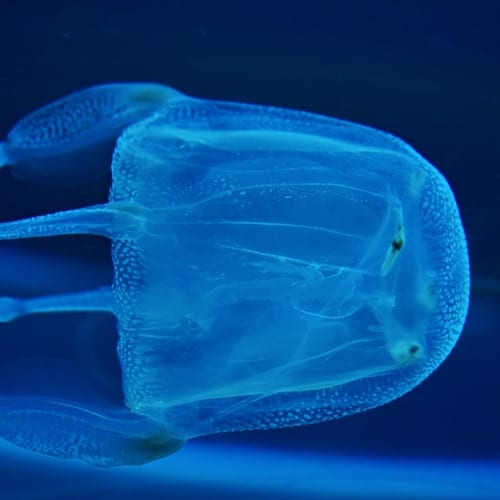 Footage of a rare deep sea creature was recently obtained from the Gulf of Mexico. The scientific name for this "deep sea jellyfish" is stygiomedusa gigantea, and although no estimated measurement has been listed, the BBC noted in 2010 that it had been observed as deep as 1,747 meters (just more than 5,731.5 feet) underwater.

That information originated from a separate sighting coordinated by Louisiana State University (LSU) researcher Mark Benfield and the cross-disciplinary Serpent initiative. According to the source, an ROV managed to film this mysterious jellyfish-like animal, a noteworthy achievement as it was the first recorded case of its appearance in the Gulf.

At that point, it had been seen only 115 total times since its discovery more than a century ago. That video showed a wide, rust-colored jellyfish with a long train rustling in the water and moving slowly around the ROV.

The more recent specimen was featured in a video from surveyor Philip Trudeau, and recorded at 3,300 feet deep in the same region. While it is the same creature, this one looks slightly different, with the bulbous head more purple in color and completely dwarfed by its long tentacles trailing behind.

These limb-like extensions can reach as long as 19.6 feet. Other sightings of the jellyfish have reportedly taken place in locations as diverse as Angola, Japan and the west coast of the United States.

Important footage should be in good condition to measure against other, similar records. Working with companies that sell insurance for ROVs, surveyors will know for sure they have the coverage needed for all stages of research.