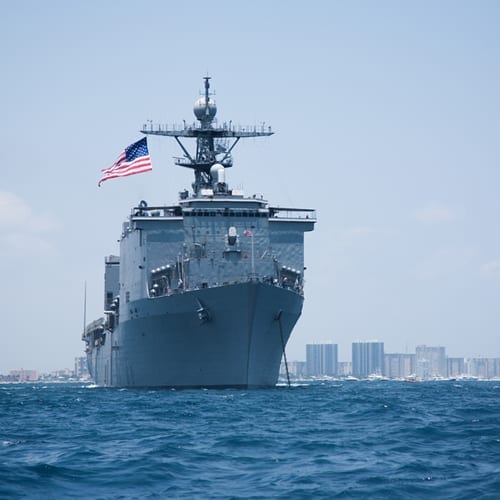 According to DoDBuzz, an online journal devoted to defense matters, the United States Navy has been working on a series of five sea-basing Mobile Landing Platforms, or MLP's, designed to help transport vehicles over water. Two of these large-scale ships have been built and delivered already out of converted oil carriers. The procurement date for the fifth and final MLP is set for 2017.

The first of these ships, USNS Montford Point, was delivered in 2013, and the second, USNS John Glenn, during last March, having been originally contracted three years earlier. These are new vessels for the Navy and will be used to support both amphibious units and, in some cases, air-based forces. The new focus on these ships reportedly reflects the changing nature of the U.S. military, with attention in both the Navy and the Marine Corps shifting toward sea and air vehicles.

In a statement quoted by the source, Navy spokesperson James Marconi explained the basic purpose that the MLP will serve. The next vessel in the sequence, USNS Lewis B. Puller, is said to have cost more than 620 million and will be delivered later this year, according to schedules.

"The platform has two primary capabilities: transfer of vehicles, equipment, personnel and sustainment at-sea from large Navy cargo ships, and delivery of these vehicles and equipment ashore with amphibious connectors," he said. "MLPs will provide capability to the U.S. military for large-scale logistics movements from sea to shore, reducing dependency on foreign ports."

This is an example of a niche type of ship with specific performance and protection requirements. Thinking ahead, organizations that anticipate a new influx of vessels should be proactive in finding appropriate boat insurance coverage solutions from an experienced provider.