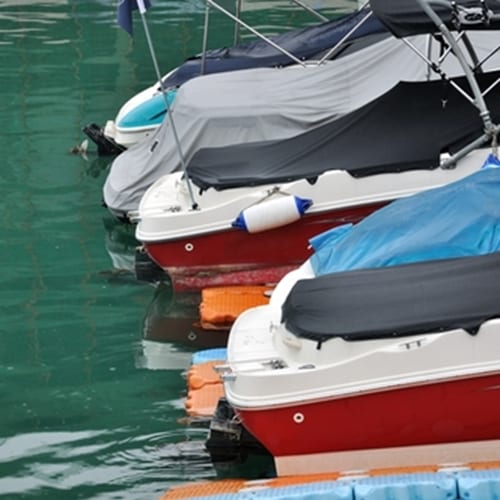 A boat owned by the Winthrop, Massachusetts fire department is still floating, but not by much.

According to the Boston Globe, the boat was somehow loosed from its offseason housing over the weekend and left to the elements, taking on water and getting pinned up under the docks until it was spotted Sunday morning. Now, the vessel sits in Crystal Cove Marina in Winthrop, about a half-mile away from its former home, as it awaits a decision from officials who must decide whether the boat can still be of services or if the damage from the water intake was too substantial.

"We pumped it out along with the fire department then pulled it out from under the dock," Steve Winkler of Sea Tow Boston said. "There's a lot of water damage. It'll take some time to repair."

The 32-foot boat was donated to the department six years ago. When it was brought into service, workers gave it a fresh paint job, to go with the roof-mounted deluge gun it uses to fight fires. Prior to its current role, the boat had seen 40 years of use by the US Coast Guard and the state Environmental Police, Marley said.

Department officials say that they moved to pump as much water out of the boat as they could as soon as they were able to free it and are now leaving the engines open to air out as it awaits inspection from an insurance assessor.

Municipalities and private boat owners must always be aware of the risks involved when storing such property during the winter. According to the news source, officials said that the vessel was properly secured as recently as the day before it had broken loose. With such unexpected threat occurring so suddenly, it remains crucial to seek out a marine insurance agency to get quality rates and coverage.