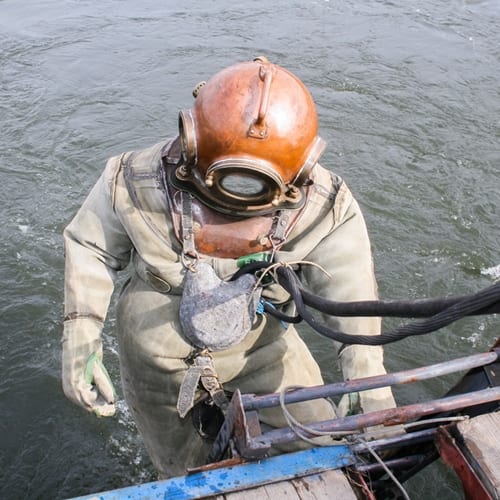 Welding is one of the more opportunistic trades in the world. A variety of industries require welding services, perhaps none more so than construction, so if you have this skill, you can apply it in a host of professions, including aerospace, public utilities, manufacturing and shipbuilding, just to name a few.

But imagine what it would be like to weld in underwater settings. For thousands of Americans, this is their world, providing key services that marine contractors – not to mention society in general – may often take for granted.

If you've always had an interest in underwater welding but weren't sure about where to begin, here's some more specifics about this line of work, detailed by the American Welding Society.

Underwater welding is a highly specialized profession that marries two applied skills. At their core, welder-divers are commercial divers, having gone through the appropriate training and certification. Some, however, get their start as welders and then add commercial diving to their occupational tool belt.

Welder-divers must be accredited in welding, through the Certified Welding Inspector Program. For instance, in order to become a certified welding inspector, the American Welding Society requires successfully passing a three-part examination, which determines the level of skill and authority a trainee has in the discipline. Numerous schools throughout the country specialize in this type of training, including Commercial Divers International in Arizona, the Divers Institute of Technology in Washington State and the International Diving Institute in South Carolina, just to name a few.

What's a day in the life like for welder-divers?
As any commercial diver would attest, particularly those who are industry veterans, there's nothing routine about underwater welding. Aside from the fact that it's a trade performed in sea settings and requires the use of various machinery – such as solderers or brazers – the tasks welder-divers are charged with run the gamut. Much of their work requires preparation and is done with other personnel, according to the AWS. Some jobs may send welder-divers to nuclear facilities, while others may entail repairs for transportation infrastructure such as bridges.

Kyle Wilkins, a nuclear diver whose jobs mostly find him in waters in and around New England, says time management is crucial in this line of work.

"You have a scope of work to do in a short timeframe," Wilkins told the AWS. "We'll spend three to four months preparing for a 20-day job."

Wilkins added he's typically using some kind of tool, from pneumatic band saws to plasma torches to cutting rods. This has been the norm for him, though, and he added how he started as a welder prior to entering the commercial diving field.

How much do they make?
As far as salary is concerned, welder-divers are often quite handsomely compensated. According to the AWS, it's not unusual for them to earn between $100,000 and $200,000 per year, which is substantially more than the median annual wage for regular welders, at $39,390, according to the Bureau of Labor Statistics. It's the combination of commercial diving and welding that make welder-divers highly sought after and worthy of six-figure earnings.

Commercial diving contractors need the best of the best to deliver for their clients and they rely on welder-divers to get the job done right. Fisk Marine Insurance International has the coverage solutions that can keep key employees protected. Ask about our e-book to see what makes Fisk a cut above the rest.