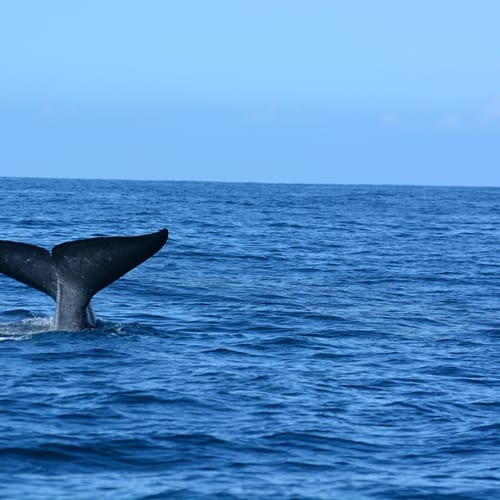 The ship E/V Nautilus is currently on an expedition around the world to document underwater occurrences. While this includes scheduled explorations of key sites like the Galapagos Rift and work with Ocean Networks Canada off of the coast of Vancouver, video captured via ROV unit during the ship's time in the Gulf of Mexico shows a surprising interaction with a sperm whale nearly 600 feet underwater. As of this writing, the ship is currently in Galveston, Texas, according to the mission's website.

One way the mission is promoting itself is through video footage it has obtained of unique underwater activity. In this example, which Discovery News describes as "very rare," a sperm whale swims around the ROV unit Hercules while operators comment. Though the whale swims in and out of vision, and the surrounding water is dark, the camera captures remarkable details, such as its fins and scar markings on the skin.

In an FAQ posted on the Nautilus mission site, scientists Dr. Stephanie Watwood and Dr. Shane Gero explained that the whale may have located the ROV because of the light it emits, even though these whales mainly navigate using sound and hearing.

"Sperm whales are thought to have good vision based on eye anatomy and their eyes appear to show good sensitivity to light," write Watwood and Gero. "It may have been attracted to the lights which are atypical for that deep." They also theorized that the scars came from squids or other sperm whales rather than manmade sources, like propellers.

Unexpected events like this are potentially great finds for researchers, but also bring with them an element of possible danger to the safety of the equipment. When units are damaged in deep waters, ROV insurance can help operators recover losses.