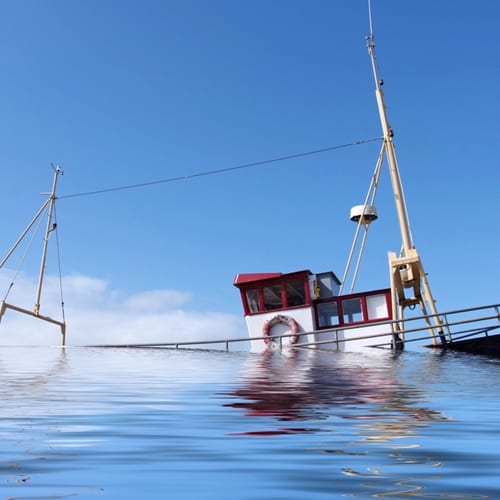 In January, a cargo ship called the Cemfjord was found capsized in the Pentland Firth off of the coast of Scotland. At the time, it was announced that an ROV would search the wreckage for information about the fate of the crew and the ship's contents.

Although the location of the crew and cargo apparently has yet to be discovered, BBC News is now reporting that the Cemfjord has been surveyed and monitored by sonar radar, giving a virtual map of the craft underwater. This is reportedly only the beginning of the search process, which will continue.

The Cemfjord's crew consisted of eight international workers, seven Polish and one Filipino, but the search, conducted by the Marine Accident Investigation Branch (MAIB) has not found any trace of them or the concrete cargo, though they have visually confirmed the name of the vessel.

The Aberdeen Press & Journal reported in January on the failed attempt to raise the remains of the ship. It quoted Tony Redding, a representative of Brise of Hamburg, the ship's owner, on the danger of sending a live crew underwater to look for evidence in the midst of hazardous weather conditions.

"It would not be right to ask a diving team to take unreasonable risks in order to possibly recover bodies," Redding said at the time. "They could lose their lives." However, he also referenced the need for more information, asserting that "People need explanations, particularly the families."

When deployed in tandem for an ongoing investigation, ROV units and other tools can save companies the potential risk of dispatching divers to the site of a crashed ship. This only works if operators are using ROV insurance that protects these devices in dangerous waters, keeping them safe from liabilities that could leave operators responsible for damages.