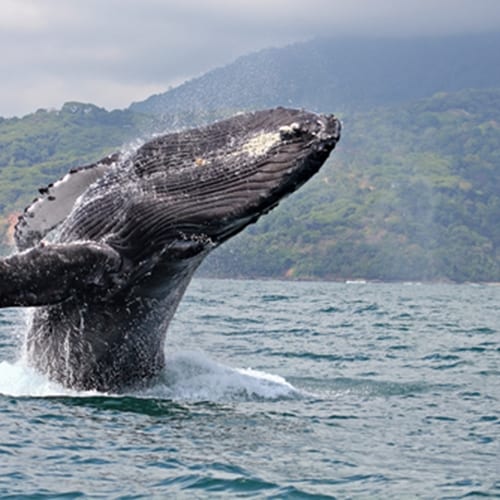 Whales are gentle giants that, in most cases, would never intentionally hurt a person. Because of their massive size, however – blue whales can grow up to 100 feet in length and weigh 160 tons – an encounter with these mammals can be dangerous.

It’s not unheard of for whales to collide with boats. In fact, just this past week an onlooker captured photos of a vessel crashing into a humpback whale off the coast of Mexico.

According to NBC’s KPNX network, Gillian Panasweicz was observing a couple of whales – perhaps a mother and baby, she said – and a pod of sea lions from her watercraft when a small boat collided with one of the whales on its way back to the marina. Panasweicz told the source that she thought the vessel was going to capsize, but fortunately the people aboard it managed to gain control and continue on to their destination.

The whale, which appeared uninjured, stayd in the area for a while, even putting on a spectacle by breaching out of the water.

“This massive, great, big, beautiful beast just shot out of the water up into the air and crashed down, and the force of its body removed the water,” Panasweicz said. “It was like an explosion. It was phenomenal.”

Hopefully most people will never have to experience this kind of confrontation between man and gentle-but-dangerous beast, but the fact remains that the risk is always there. Although no damage occurred in this particular instance, that isn’t always the case. By working with a marine insurance agency with years of industry experience, fishermen and recreational boaters can feel more confident taking their vessels out onto the water, knowing they’re covered by the highest-rated insurance providers.