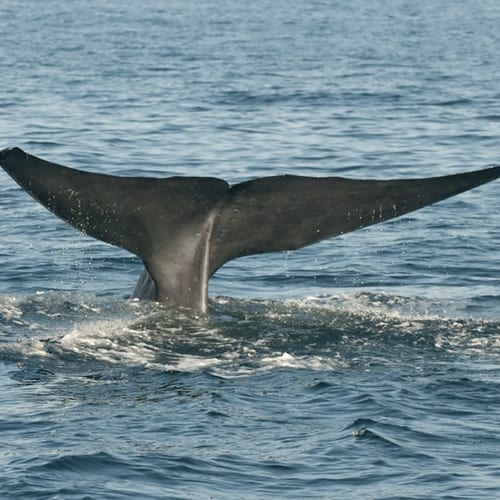 The United Kingdom is not a common sighting place for blue whales, but scientists have evidence of the creature off of the Cornwall coast, a sighting that Professor Russell Wynn photographed while onboard the RSS James Cook on August 24. While the photo doesn't show much of the whale above the surface, it is still thought to be a historic moment as may be the first example of a blue whale photographed in these waters.

According to a map provided by a Guardian story, the sighting occurred west of the English Channel, at a spot in the Atlantic Ocean not far from the Celtic Sea or the Bay of Biscay. This encounter hints at the kind of ecosystem the marine environment supports.

In a press release from the National Oceanography Centre published earlier this month, Wynn described the appearance of the whale, which happened suddenly alongside his monitoring of other marine mammals.

"I was undertaking our daily marine mammal survey and enjoying watching up to seven Fin Whales around the ship, when the Blue Whale suddenly surfaced about a kilometre away," he said. "I had just enough time to secure some conclusive photos before the visibility decreased and the whale disappeared into the gloom."

Because such notable instances can lead to further investigation as researchers take a closer look, commercial diving companies should find an insurance policy that will compensate them fittingly in the event of a major loss or catastrophe. Policies can also be tailored to what a diver will be doing, including scientific monitoring or photography.