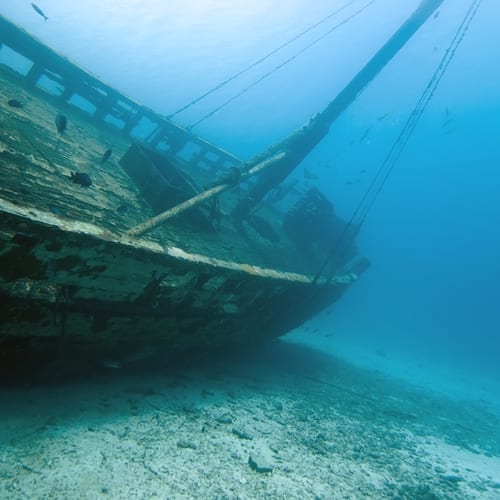 After speculation and findings from local researchers, the state of Michigan has officially agreed to dispatch divers to a shipwreck site in Lake Michigan. Although there's no conclusive evidence yet, two divers believe that a wreck that they found there recently could be the remains of a famous lost French vessel.

That ship, Le Griffon, also known as "The Griffin," is thought to have disappeared in 1679 when commander Rene-Robert Sieur de La Salle led it into the Great Lakes. Divers Kevin Dykstra and Frederick Monroe discovered the wreck and are currently meeting with state officials on the potential future of the excavation effort. The Detroit Free Press reports that the state hopes to confirm the identity of the wreck this summer.

One of the archeologists involved with the project, Wayne Lusardi, told the source that he didn't actually believe this would turn out to be the Griffon, or even from the same century as that ship.

"Based on some of the objects that are visible in the photos, and based on the description of the wreck by the discoverers, suggest strongly that it is not the Griffon, but rather a 19th, early 20th Century vessel," he said.

The original divers have presented video evidence of the discovery to help support their claims, and the site has also yielded bits of wood and metal that could have originated from the ship. According to MLive Muskegon Chronicle, one of the artifacts Monroe and Dykstra discovered even resembles a possible wooden Griffin figurehead.

Providing proper commercial diving insurance for the crew involved in an expedition to risky shipwreck territory prepares organizations for possible dangers and gives operators a sense that they can dispatch experienced professionals without fear.