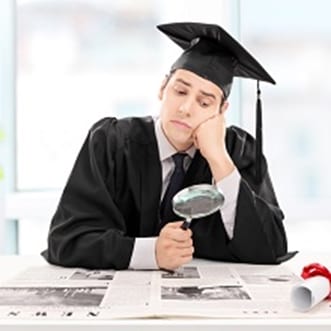 It's commencement season, the time in which millions of graduates are concluding the scholastic portion of their lives and entering the working world. This includes graduates who've pursued commercial diving, an industry that's gaining in popularity because of the unique experiences divers have every day at work.

Even though the unemployment rate in the U.S. is well below 5 percent, according to the latest numbers from the Labor Department, there remains worry among employment seekers that all their hard work will be for naught, unable to land a job now that they have the skills needed to get hired.

Based on a recent survey, however, most companies are looking squarely at graduates to fill positions that have opened up.

Nearly three-quarters of businesses intend to hire members of the Class of 2017, according to a new poll conducted by CareerBuilder. Last year when a similar survey was conducted, two-thirds of employers said they planned on recruiting newly minted college alumni.

More employers increasing starting pay
In addition to taking on more grads who have concluded their studies, employers also say that starting salaries are expected to climb. Approximately 39 percent indicated initial pay would be in the $50,000 range, the poll revealed. Last year, just 27 percent of employers planned on paying their new hires this amount. This figure is right around what the average commercial diver makes annually, according to the most recent data compiled by the Bureau of Labor Statistics.

Rosemary Haefner, chief human resources officer at CareerBuilder, noted that businesses are competing over a smaller pool of prospective hires.

"Competition for soon-to-be college grads is escalating to a degree we haven't seen in the last 10 years," Haefner said. "In the current environment, where job unemployment continues to decrease and there's continued competition for sought-after skills, employers are especially attracted to college graduates, and the fresh perspective and skills they can bring to the workforce."

Engineering a leading industry with plans to hire
College graduates are in demand across certain industries more than others. For example, based on the poll findings, 30 percent of companies who fall under the business banner are looking to hire students fresh out of college , with engineering slightly behind at 26 percent. This is good news for divers, as civil engineering is among the top five industries that hire commercial divers, according to the Labor Department. Many divers also work in construction, an industry that is also hiring, based on the CareerBuilder survey.

What commercial divers really have going for them is the fact that the profession requires more hands-on knowledge than book knowledge, even though both forms are used, according to the Divers Institute of Technology. Close to 45 percent of businesses said that institutions of higher learning placed too much emphasis on textbooks and not enough on real-world, practical skills, the CareerBuilder survey revealed. However, on the whole, more employers believe that schools are sending students out into the working world better prepared than they have in the past.

What does it take to enter the commercial diving industry? Much like other professions, commercial diving is a multi-pronged preparation process, the length of which depends on previous experience. The basic requirements include a high school diploma or GED equivalent, obtaining a TWIC card and possessing superior swimming skills, according to the DIT. Additionally, prospective divers should ideally attend and complete course work from an accredited commercial diving school.

Fisk Marine Insurance International wrote the book on high quality marine insurance coverage, serving the commercial diving industry for more than a quarter of a century. We wish new divers nothing but the best in their employment hunt and encourage marine contractors to take advantage of these up-and-comers who are fresh out of the collegiate waters.