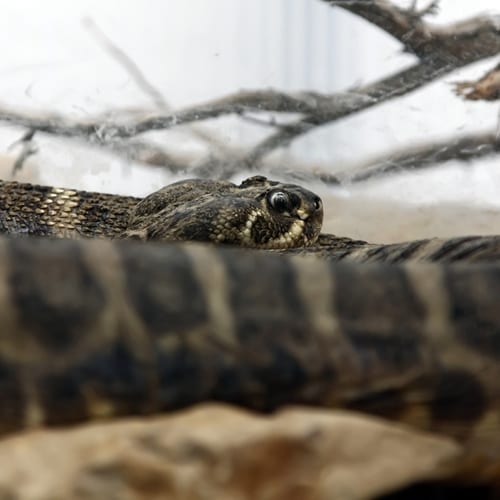 Hidden dangers can lurk just about anywhere in the deep blue sea, which is why commercial diving is an inherently risky profession to wade into. Seafarers got up close and personal to some of these threats after a green mamba was spotted slithering its way onto their cargo ship off the west coast of Africa recently.

As reported by multiple sources, including The Maritime Executive, the deadly snake was identified in Aberdeen, Scotland earlier this month, where the cargo ship was docking for the time being. The sea vessel itself originated from West Africa, which explains how the green mamba found its way to Scotland, climbing aboard the ship at some point before the crew set sail.

No doubt frightened by the slithery find, the crew members were able to catch the snake before it hurt anyone after placing it in a sealed container, multiple sources confirmed. They then contacted the Scottish Society for the Prevention of Cruelty to Animals for proper removal.

"The green mamba snake is one of the most deadly snakes in the world," said John Carle, SCPA chief inspector, according to the Daily Express. "It was picked up in Aberdeen by one of our animal rescue officers after arriving on a boat from Africa."

Mambas are extremely dangerous and potentially deadly
Appropriately titled, the green mamba has a grass-green hue to it, but is usually found traipsing in trees rather than wriggling in water, though it is capable of swimming. Perhaps its best-known characteristic is the deadly venom that it contains. Experts say that the green mamba – which can grow to be more than nine feet in length – contains noxious, fast-acting toxins in their venom that can kill within 30 minutes of being bitten.

Fortunately, you'll be hard-pressed to find a green mamba anywhere in the United States, whether on land or sea. But there's a reason why commercial diving is one of the more dangerous lines of work, as you never know what conditions will materialize in the wide open waters. Fisk Marine Insurance has the wisdom, experience and foresight in the industry to ensure that you and your crew are protected from the unexpected with the proper coverage.