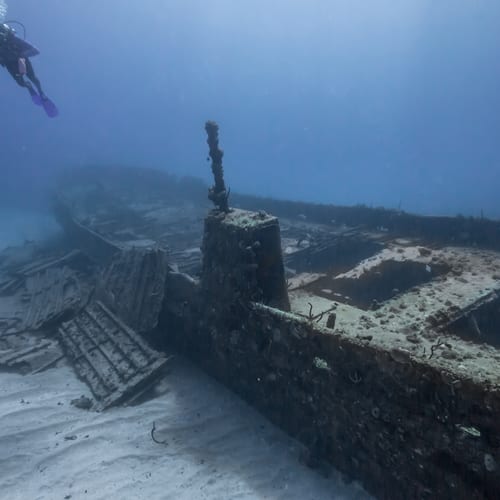 Those who specialize in salvage commercial diving find some pretty unique items in the nether reaches of the ocean, and off the coast of Oman, divers happened upon a device that is believed to be the predecessor to the compass, realizing this several years after its recovery.

As reported by BBC News, marine archaeologists conducted a dive in the Indian Ocean in 2014, looking to see what could be culled from a Portuguese explorer ship that took on water during a violent storm and ultimately sank back in the early 14th century. Hidden among the wreckage was an astrolabe, a navigational tool that measures altitude and latitudinal positioning. Historians say they believe the device was used by crew members to get a better understanding of their positioning relative to the sun in order to establish their bearings.

At the time they retrieved the device, however, they were unsure of what it was, but after performing additional research, they believe it was used for navigation purposes.

A rare find
David Mearns, a chartered marine scientist, fellow of the Marine Institute of Engineering and one of the world's foremost experts on shipwreck discovery, told the BBC News that he's never seen anything quite like it in his 25-year career.

"It's a great privilege to find something so rare, something so historically important, something that will be studied by the archaeological community and fills in a gap," Mearns explained. "It was like nothing else we had seen and I immediately knew it was something very important because you could see it had these two emblems on it."

One of the two symbols was immediately identifiable, Mearns added, depicting a Portuguese coat of arms. After further research, the other is likely the personal emblem of the then king of Portugal, Don Manuel I.

Astrolabe measures 2 millimeters thick
BBC News reported the disc, which is only about 2 millimeters thick and 17.5 centimeters in diameter, is made of bronze, a resistant metal that enabled the astrolabe to maintain its shape and engraved etchings.

Commercial divers are often included in shipwreck research projects, finding not only historically significant property but valuable property as well. Indeed, commercial divers with Odyssey Marine Exploration in 2011 found 240 tons of silver approximately 300 miles off the southwest coast of Ireland in the S.S. Gairsoppa, The New York Times reported.  A British merchant ship that was torpedoed back in 1941 during World War I, the S.S. Gairsoppa was 412 feet long, enabling it to carry as much silver as it did. Historians think it was being transported to England from India.

Of the 240 tons of silver, divers were able to haul 48 tons of it back to the surface, according to the Divers Institute of Technology. This translated to more than 1,200 bars, which at the time was the equivalent of $38 million. In 2011, silver prices ran approximately $50 per ounce. Today, an ounce of silver goes for around $17, due to increased supply.

Commercial divers' assignments literally take them all over the world and to some of the deepest reaches of the earth. Fist Marine Insurance International can  help keep firms' key employees covered, plying maritime employers with a host of product options that can serve their needs.