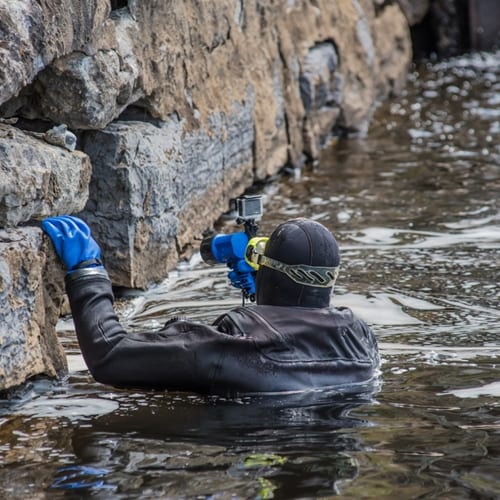 A career in commercial diving is an adventure seeker's delight. Each dive brings new experiences that lend new meaning to the phrase "daily grind." What's more, this variety is found even in specific disciplines. The following are five different types of commercial diving jobs and what a day in the life often entails.

1. Onshore diving
From welding to rigging, commercial divers who can draw from hands-on experience are major assets to marine contractors. Onshore divers perform some of these same manual labor jobs while immersed in the water. However, what distinguishes onshore divers from some of their deep sea peers is where their services are performed, typically in interior lakes and rivers. Also, because these jobs usually don't require lengthy periods of time, onshore diving is ideal for those who prefer to work locally rather than traveling. In addition to welding, other jobs of onshore diving include vessel repair and pipeline maintenance.

2. Offshore diving
As its name implies, offshore diving is a career that takes divers to the deep blue sea – and all that goes on beneath the surface. Because the nature of these tasks tend to be more involved and require more time "at the office," offshore commercial diving tends to pay more than other positions, the amount of which depends on experience. Offshore divers also are more handsomely compensated because the jobs involved can be demanding, particularly those that pertain to oil and gas projects, which take several months, if not years, to complete from start to finish.

3. HAZMAT diving
While commercial diving is an ideal field to enter because it allows professionals to put what they've learned into practice, it's also great because even those with relatively little experience can learn on the job. However, the same can't be said for HAZMAT divers. People who are hired in this division of diving must be highly experienced because it can often involve handling combustible material that can explode or cause environmental degradation if caution isn't strictly adhered to. Because of the risks that come with the position, HAZMAT divers tend to have higher annual salaries.

4. Scientific diving
You won't find a more ideal science class setting than under the sea, as life in all its forms literally washes over you. Infeasible though this may be for the typical high school or college, it's what scientific divers get to experience all the time, performing research of their own, or on behalf of a business or educational institution. It's important to keep in mind, though, that scientific divers play dual roles – in short, they're scientists clad in divers' clothing. As such, scientific diving is a more specialized field that may require additional schooling.

5. Military diving
Individuals with military backgrounds are often told they would make ideal divers, should they decide to re-enter civilian life after their time in the service. Military diving is part of the reason why. Those who perform these tasks are usually in the U.S. Navy or Marines Corp, and take on tasks that run the gamut, such as vessel repair, salvage and underwater tactics. Because the skills learned in the military carry over well in business world, military divers are highly sought after by companies who are hiring.

Just as commercial diving is multifaceted, the insurance products and services at Fisk Marine Insurance International are similarly wide ranging. We not only serve the commercial diving sector, but also commercial watercraft, offshore engineers and ROV manufacturers and operators.